There once was a cat named Mori.
You want to hear her story?
Born on a farm in southern France,
One of many, with little chance
Of anything at all really.
To have dreams would just be silly.

But one day along came Agnes,
The very model of kindness,
Looking for kittens needing homes,
Driving a car decked out in ohms.
With no fear of coming to harm
Mori said goodbye to the farm. 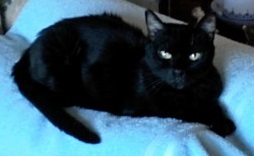 They drove far to reach a shelter
With lots of French kittens like her,
From overcrowded run down farms.
A vet took Mori in her arms
To give her a check up and shots
And then treats from one of her pots.

When that was done she ate her fill
Then hopped up to the window sill
To see the town of Perpignan.
She heard the words of a French man
But only understood some bits:
Complaints about his benefits.

But soon it was goodbye again.
Agnes lived in La Granja, Spain
Where a palace with great gardens
Beset with fantastic fountains
Was the vision that Mori saw,
So beautiful she was in awe.

Mori ran wild with Spanish cats
And had a good time chasing rats.
Is life nothing but happy fun
Wasting your days under the sun?
She no longer wanted to roam,
Lucky is the cat with a home.

Quite soon Mori’s wishes were heard.
Agnes had been true to her word
And found Mori a friendly place
An apartment with lots of space
And a kitten named Apolo
That was fluffy, white and yellow.

This was Madrid, the capital.
Mori hoped she’s like her new pal,
But Apolo hogged attention,
Could be whiny, not to mention
He’d been indoors all his short life
Never known hunger or real strife.

He was the human’s baby pie,
Mori could naught but watch and sigh.
Admire the view: a cathedral.
Be second fiddle, that was all.
She would get jealous and be mean
Careful always not to be seen.

She would fight with the spoilt toft cat
Bite his ears, scratch him, see if that
Would get him out of the way for
while, but it just made him sore.
He didn’t know how to fight back
He’d hide till the human was back.

Poor Apolo. Just a baby,
He could have used a friend. Maybe
If Mori could have thought ahead
She’d have tried to be one. Instead
A new human took her away
Oh so far, to the U.S.A. 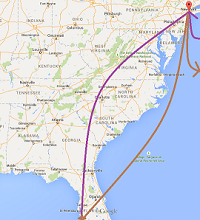 This new human’s name was Ulla,
And she lived in Sarasota,
On the gulf in Florida state.
No other cats to be her mate
As this was an apartment too
But at least the views were all new.

Ulla was a kind old lady
Who slept a lot but was tidy.
Mori had to learn some English
To speak to seagulls about fish,
(That’s what pelicans like to eat)
To get herself a tasty treat.

This great friendship also ended
When a heron crane defended
What it though was his private perch.
Swooping, it made the seagull lurch.
Seagull left and the pushy bird
Stayed. Mori did not say a word.

Then Ulla grew tired of the beach
So her son Luis came to fetch
Mori so Ulla could travel –
A cat in tow would cause hassle.
Luis took Mori to New York
Where she was fed Korean pork.

In New York Mori could wander,
Jump over fences to gander
At skyscrapers and restaurants
Or listen to strange speakers’ rants.
She liked this place, so odd and new
There was always something to do.

She stayed with Luis a few years.
With him nearby she shed no tears,
Until his girlfriend came to stay
And asked the cat be sent away.
But not to fear because by now
She knew things would work out somehow.

By now Ulla had seen the world
And settled in Madrid. She told
Luis to send her sweet Mori
Of whom she had fond memory.
Then Mori hopped on a big plane
To get back to living in Spain.

Now she will never again roam
As she finally has a home
Where she can lie out in the sun
Chat with the pigeons and have fun
In a comfy new penthouse flat.
So what do you think about that?

Now that the days are getting shorter I can’t break myself of the habit of sipping single male whisky sours in the back garden sat on my blue plastic chair while looking up at the clouds, blue sky, stars or just black. Spiders try to make webs on the chair while I’m inside doing whatever but I don’t let them last long. The dog runs in and out. Digs up his rawhides to rebury them in another corner, then changes his mind and puts them back where they were. He’s lost patience now and whines to go back in to avoid the stress of it all.

The neighbour and her mother snigger about the single girl next door. They tell the hyperactive boy to go out, not to cry about stepping on legos if he can’t look where he’s going, and to dry off before he goes in. The demented in the old people’s home across the alley scream bloody murder because they don’t want to be made to eat, don’t want to go to bed, and don’t want to be where they are. Occasionally people walk back and forth from the takeaway round the corner arguing about what they got or who gets what.

A full month behind on my book deadline and I still can’t get myself back on track. The angst is dissipated, but the thinking doesn’t stop. Probably it’s too many bad movies with too many impossible alternative universes to imagine. Could just be the uncharacteristic weather and the wasted time in the car. I’ve finally pulled up all the vines and cut the two foot long grass down to two inches. Surprised to see the heather is still alive and thriving and the strawberries dried up on the plant uneaten by the snails. Bees buzz through the grass apparently angry that I’ve culled the vines they were visiting. Whisky sours are an art though and Venus is constantly looking down.